We include Geisha as a part of this series because it does count as a business as Geisha was originally equal to female entertainers that made a living by having this unique identity.

Before Geisha appeared, in the early stages of Japanese history,  female entertainers who usually came from displaced families in the late 600s. Sexual delights were embraced by traditional Japan and were not Shinto taboo in the country. It was very common for men to find sexual enjoyment outside their marriage. There were legal or licensed sexual services by women (yujo) in "pleasure quarters" in 1600s. The highest yūjo class was the geisha's predecessor, called tayuu, a combination of actress and prostitute. They performed erotic dances and skits "to be wild and outrageous". The highly accomplished courtesans entertained their clients by dancing, singing, playing music and even poets and calligraphers. Gradually, they all became specialized and the new profession. It was not until 18th century that the first geisha appeared. The first geishas were actually men.

The first group of female geishas were the teenage odoriko ("dancing girls"). They were trained with high cost to be great dancers to entertain  private homes of upper-class samurai around 1680s but then turned to prostitution by the early 18th century. Those who were no longer teenagers adopted other names—one being "geisha", after the male entertainers. The first woman geisha known was a Fukagawa prostitute, in about 1750. Her real identity was a skilled singer and shamisen player named Kikuya.

After prostitution became illegal in 1900s and World War II happened that brought down the demand for geisha, many geisha tea houses, bars and related businesses were forced to shut down. Regrouped geisha occupation came up in 1960s  during Japan's postwar economic boom. Since then, in modern Japan, a geisha's sex life is her private affair. Formerly those who chose to marry had to retire from the profession, though today, some geisha are allowed to marry. It was traditional in the past for established geisha to take a danna, or patron, typically a wealthy man, sometimes married, who had the means to support the very large expenses related to a geisha's traditional training and other costs. This still occurs today but rarely. A geisha and her danna may or may not be in love, and intimacy is never viewed as a reward for financial support. While it is true that a geisha is free to pursue personal relationships, a danna is carefully chosen and unlikely to be casual. Geisha's good reputation is not taken lightly

Traditionally, Geisha began their training at a young age. Some girls were bonded to geisha houses (okiya) as children. Daughters of geisha were often brought up as geisha themselves, usually as the successor or daughter-role to the okiya. Geisha study of music and dance and continue it throughout their lives. Geisha can work into their eighties and nineties, and are expected to train every day even after seventy years of experience. The dance of geisha has evolved from the dance performed on the noh and kabuki stages. The "wild and outrageous" dances transformed into a more subtle, stylized, and controlled form of dance. It is extremely disciplined, similar to t'ai chi. Every dance uses gestures to tell a story and only a connoisseur can understand the subdued symbolism. For example, a tiny hand gesture represents reading a love letter, holding the corner of a handkerchief in the mouth represents coquetry and the long sleeves of the elaborate kimono are often used to symbolize dabbing tears. The dances are accompanied by traditional Japanese music. The primary instrument is the shamisen.

The traditional makeup of an apprentice geisha features a thick white base with red lipstick and red and black accents around the eyes and eyebrows. It is said the sexiest is the exposed neck of a geisha powdered in white. Geisha always wear kimono. Apprentice geisha wear highly colourful kimono with extravagant obi. The obi is brighter than the kimono she is wearing to give a certain exotic balance.  The hairstyles of geisha have varied through history. The current style developed from the traditional shimada hairstyle during the 17th century. 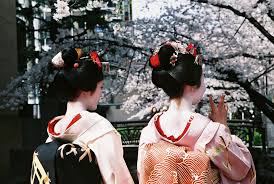 Modern geisha still live in traditional geisha houses called okiya in areas called hanamachi (花街 "flower streets"), particularly during their apprenticeship. Many experienced geisha are successful enough to choose to live independently. The elegant, high-culture world that geisha are a part of is called karyūkai (花柳界 "the flower and willow world"). Young women who wish to become geisha now most often begin their training after high school or even college.  Kyoto is most strongly associated with the geisha tradition. Total number of geisha in Japan is estimated to be from 1,000 to 2,000. Geisha are often hired to attend parties and gatherings, traditionally at ochaya (お茶屋, literally "tea houses") or at traditional Japanese restaurants (ryōtei).  The arrangements are usually made through the geisha union office, which keeps each geisha's schedule and makes her appointments both for entertaining and for training.

We met this beautiful geisha at the traditional restaurant in Kyoto. Taking picture with her is free as long as you spend at the restaurant. Are you curious what a modern geisha's work life looks like? Go to Kyoto and you may find one that can tell.

Very first surgery in life and during pandemic